"Chip the glasses and crack the plates!
Blunt the knives and bend the forks!
That's what Bilbo Baggins hates -
Smash the bottles and burn the corks!

Cut the cloth and tread on the fat!
Pour the milk on the pantry floor!
Leave the bones on the bedroom mat!
Splash the wine on every door!

Dump the crocks in a boiling bowl;
Pound them up with a thumping pole;
And when you've finished, if any are whole,
Send them down the hall to roll!

That's what Bilbo Baggins hates!
So carefully! carefully with the plates!"
K

A world for children

The publishers claim that “The Hobbit,” though very unlike “Alice,” resembles it in being the work of a professor at play. A more important truth is that both belong to a very small class of books which have nothing in common save that each admits us to a world of its own --a world that seems to have been going on before we stumbled into it but which, once found by the right reader, becomes indispensable for him. Its place is with “Alice,” “Flatland,” “Phantastes,” “The Wind in the Willows.”

To define the world of “The Hobbit” is, of course, impossible, because it is new. You cannot anticipate it before you go there, as you cannot forget it once you have gone. The author's admirable illustrations and maps of Mirkwood and Goblingate and Esgaroth give one an inkling --and so do the names of dwarf and dragon that catch our eyes as we first ruffle the pages. But there are dwarfs and dwarfs, and no common recipe for children’s stories will give you creatures so rooted in their own soil and history as those of Professor Tolkien --who obviously knows much more about them than he needs for this tale. Still less will the common recipe prepare us for the curious shift from the matter-of-fact beginnings of his story (“hobbits are small people, smaller than dwarfs --and they have no beards-- but very much larger than Lilliputians”) to the saga-like tone of the later chapters (“It is in my mind to ask what share of their inheritance you would have paid had you found the hoard unguarded”). You must read for yourself to find out how inevitable the change is and how it keeps pace with the hero’s journey. Though all is marvellous, nothing is arbitrary: all the inhabitants of Wilderland seem to have the same unquestionable right to their existence as those of our own world, though the fortunate child who meets them will have no notion --and his unlearned elders not much more-- of the deep sources in our blood and tradition from which they spring.

For it must be understood that this is a children’s book only in the sense that the first of many readings can be undertaken in the nursery. “Alice” is read gravely by children and with laughter by grown-ups; “The Hobbit,” on the other hand, will be funniest to its youngest readers, and only years later, at a tenth or twentieth reading, will they begin to realize what deft scholarship and profound reflection have gone to make everything in it so ripe, so friendly, and in its own way so true. Prediction is dangerous: but “The Hobbit” may well prove a classic.

J. R. R. Tolkien has had a prolific posthumous career and an especially productive twenty-first century. Hollywood canonization (with a little help from Peter Jackson) has been followed by three recent Tolkien publications: The Children of Húrin (2007), The Legend of Sigurd and Gudrún (2009) and The Fall of Arthur (2013), all edited by Tolkien’s youngest son Christopher (now in his late eighties). News that Tolkien’s translation of Beowulf is to be published for the first time later this spring has aroused great interest from Tolkien academics and enthusiasts. The translation, completed in 1926, had been known about for many years, but the decision to release it was only taken recently. The author himself “seems never to have considered its publication”, commented Christopher Tolkien.

How, then, might the ghost of Tolkien Senior greet the decision? One clue as to his opinion of posthumous publication can be found in a piece he wrote for the TLS in 1923. The review was of Hali Meidenhad: An alliterative prose homily of the thirteenth century in an edition by the founder of the Early English text Society, F. J. Furnival (1825-1910).

The thirty-one-year-old Tolkien found it “much to be regretted that before his death Dr. Furnival did not, apparently, complete his work, which is here published without alteration as he left it”. Tolkien’s main gripe was with a lack of editorial interference: “It may be doubted whether, even though it has been done out of great respect for a great name, the best service has been rendered to that name, or to English scholarship, by publishing work that might have been revise and supplemented”.

Since Tolkien’s death forty years ago, Christopher Tolkien has established an excellent reputation as an editor of his father’s works, and, whatever the state of the original translation, we can expect the best service. The edition will incorporate a previously unpublished story, “Sellic Spell”, and the series of lectures Tolkien gave about Beowulf at Oxford University in the 1930s, including “Beowulf: The monster and the critics”, an influential piece of criticism that helped to rescue the poem’s reputation as a valuable literary work in its own right rather than an ill-fitting mishmash of legends useful largely as a historical document.

Reviewing R. W. Chamber’s study of the poem in the TLS in 1922, Professor Bruce Dickins had found it necessary to begin with an apology: “Beowulf, with all its shortcomings in fable, structure and characterization …”. This kind of caveat was de rigeur. Dickins approved of Chambers’s (largely historical) treatment but admitted that “in a field so thoroughly worked there is not perhaps much room for originality”. He hadn’t reckoned with the intervention of J. R. R. Tolkien.

Beowulf: A translation and commentary, together with “Sellic Spell” will be available from Harper Collins for £20 from May 22. It will be reviewed in a forthcoming edition of the TLS.

The Middle Earth Illustrators J.R.R. Tolkien Loved—and the Ones He Abhorred

While Peter Jackson's Lord of the Rings trilogy, and now The Hobbit movie may be how many modern folks see Middle Earth, it's important to remember that the first person to illustrate J.R.R. Tolkien's world was Tolkien himself. Tolkien had a very clear sense of how Middle Earth should and should not look, and while he had doubts about his own abilities as an illustrator, he also had very strong opinions about other artists who tried to draw his world and his characters. Here are some of the illustrators whose works found favor with Tolkien—and a few who attracted his artistic ire.
[...] io9.com/5968792/the-middle-earth-illustrators-jrr-tolkien-lovedand-the-ones-he-abhorred 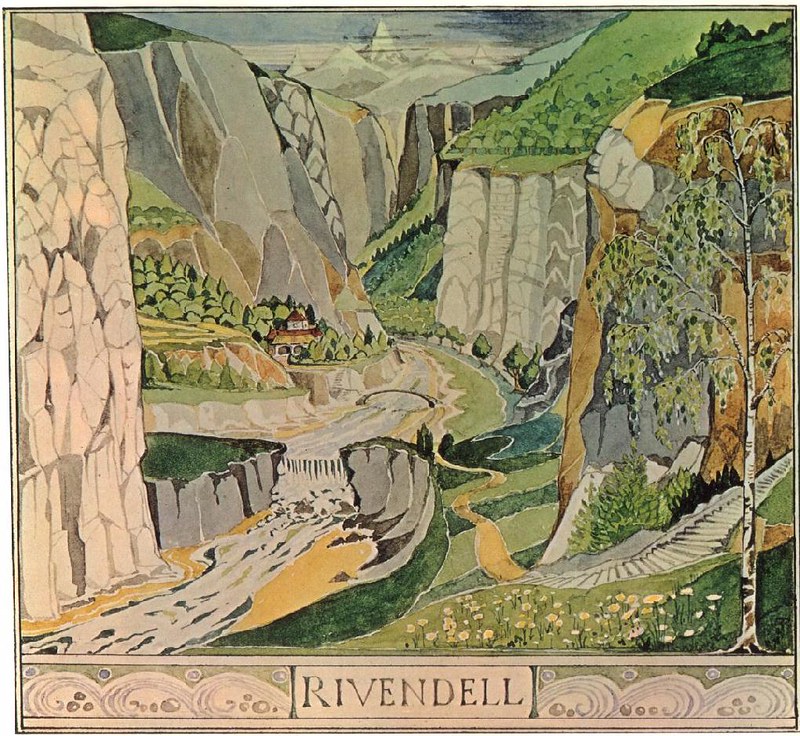 
daeman said:
...
Grey as a mouse,
Big as a house,
Nose like a snake,
I make the earth shake,
As I tramp through the grass;
Trees crack as I pass.
With horns in my mouth
I walk in the South,
Flapping big ears.
Beyond count of years
I stump round and round,
Never lie on the ground,
Not even to die.
Oliphaunt am I,
Biggest of all,
Huge, old, and tall.
If ever you'd met me
You wouldn't forget me.
If you never do,
You won't think I'm true;
But old Oliphaunt am I,
And I never lie.

Oliphaunt, J.R.R. Tolkien (The Lord of the Rings, The Two Towers, "The Black Gate is Closed")

daeman said:
The Middle Earth Illustrators J.R.R. Tolkien Loved—and the Ones He Abhorred

While Peter Jackson's Lord of the Rings trilogy, and now The Hobbit movie may be how many modern folks see Middle Earth [...] Tolkien had a very clear sense of how Middle Earth should and should not look, and while he had doubts about his own abilities as an illustrator, he also had very strong opinions about other artists who tried to draw his world and his characters.
Click to expand...