A murder of crows

-This more poetic term for a flock of crows can be traced back at least to the 15th century, when it was recorded as a murther of crowes. Murther is a variant of Middle English murthre 'murder,' though the th sound had begun to be replaced with a d around 1300 C.E. There are several theories as to how this particular term came about, but all of them have to do with the supposed behavior of crows. For instance, crows are scavengers and therefore often seen feeding on rotting bodies of various sorts. Survivors of wars have described how the battlefields were covered in black as crows (and ravens) came down to eat the dead. Another theory hearkens back to old folklore which told of groups of crows essentially holding court over members of their flock that had committed offenses. If they decide against the "defendant" crow, then the rest of the flock swoops down on it and kills it. There are legends outside of the Germanic culture that relate to crows being judges over people as well, and how their appearance is an omen of death.

Και πιο κάτω:
...I do know, however, that the behaviour of ganging up on one crow (which does not necessarily have to be the weakest) is real. In Swedish, it's called "kråkriksdag", roughly translated as "crow parliament". I've seen it happen, and it is a brutal event. There is some general squaking, but there is no clear target. Suddenly it starts and all of them jump on one crow, picking at it until it is dead, literally tearing it to pieces. They are so focused on this that you have to run straight in among them to scatter them.


.........Some of the terms collected on websites, such as “an absence of waiters” or “an attitude of teenagers,” are clearly of recent vintage, coined in tiny fits of wit by the kind of people who drive their friends and families mad with constant puns. For me, a little of this goes a long way, and eventually “a brace of orthodontists” or “a disputation of lawyers” makes me feel like I’m trapped in one of those creepy-cutesy public radio quiz shows.

But it would be mistake to tar all of these terms as simply casual inventions in pursuit of a chuckle. Of course, someone did make them up. The entire English language was “invented” in one way or another. But the truly interesting collective nouns, such as “murder of crows” or “a cete of badgers,” were coined a very long time ago, mostly in the 15th century, and far from being merely fanciful inventions, these terms were once considered the proper way to describe a group of animals. Some, such as “a pride of lions” and “a gaggle of geese,” remain in common use today after being rescued from obscurity and revived in the 19th century.

Staff member
...
All this time - Sting


Two priests came 'round our house tonight
One young, one old
To offer prayers for the dying
To serve the final rite
One to learn, one to teach
Which way the cold wind blows
Fussing and flapping in priestly black
Like a murder of crows

And all this time, the river flowed
Endlessly, to the sea

If I had my way, I'd take a boat from the river
And I'd bury the old man
I'd bury him at sea

Murder of Crows, second book in the Others series by Anne Bishop
Last edited: Oct 30, 2014 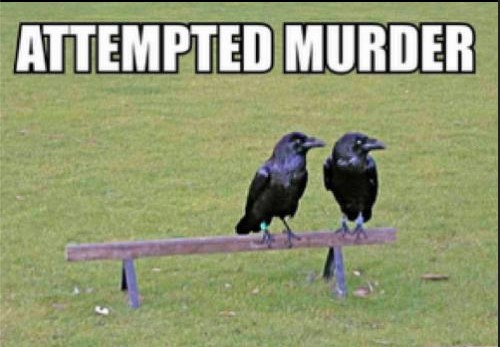 A subset of collective nouns is terms of venery (originally όροι κυνηγίου but now broadened to include all sorts of groups of animals).

Outside of poetry & prose, I'm not sure if there exists an equivalent subset of collective nouns for animals in Greek, is there?

Wikipedia has a good List of collective nouns in English, and a google search will return even more.

Such lists are always fun to read as they are constantly expanded to include groups of just about anything. Some recent ones sourced from bernardina's last link:

a flummox of questions (The Word Detective)
plus a tattlery of comments from readers:
We’ve just decided that the plural for “doofus” is to be: “doofi”.
We further hereby propose the collective noun for more than one doofus to be
a chagrin of doofi
a brace of orthodontists
a lunacy or loonacy of loons
a murder of crows... If there are only two crows is it an attempted murder?
Per the American Society of Crows and Ravens [...] the correct term is
a caucus of crows [rhymes with “raucous”]
they’re social birds, if you count a wake a social event
a google of searchers
a barrel of laughs
a flush of toilets

(This one goes to my pal Daeman)
How about ‘a string of asses….’?

I can only come up with something more prosaic, a collexion of Lexilogians.

cougr said:
...
I can only come up with something more prosaic, a collexion of Lexilogians.
Click to expand...

When in lection, in a Lexi session, my predilection.

40 licks from me for that one!

When gathered in person, a collocation of Lexilogists.

Plus: a thong of booties, a tangle of tangas. And a twerking of bottoms, when hyperactive.
C

OK, diversion party's over, folks. Back to the salt mines. We're already on page 2, and we haven't even BEGUN to answer bernardina's original question (myself included)!

Oh! What was the question again?
A murder of crows in Greek.
I'm no poet, I've no context, but I'm willing to take a shot in the dark at it:

From
Charles C. Bombaugh. Gleanings for the curious from the harvest-fields of literature: a mélange of excerpta (1875), p. 185.

Synopsis for "The Parliament of Rooks"

One day, Lyta Hall puts her son Daniel Hall to bed while she talks to her friend on the phone. In sleeping, Daniel enters the Dreaming.

On the steps of the House of Secrets, Daniel encounters Matthew the Raven and Eve, who lead him inside to take tea with Abel. Their gathering is interrupted by Cain, who maliciously suggests that each of them tell a story to the little boy.

Cain offers a mystery; the mystery of the parliament of rooks. Each member of the corvidae family of birds has an interesting name for a gathering thereof: a murder of crows, a tiding of magpies, an unkindness of ravens, and a parliament of rooks. The last gets its name from the fact that often, these gatherings of rooks will form a circle around a single rook, like in a parliament or trial. That bird makes specific calls until one of two outcomes occurs. Either the entire gathered parliament flies away leaving the lone rook alone in the field, or they all turn on that rook and peck it to death. The reason why the birds do this is the great mystery.

Next, Eve reluctantly tells a story. She explains that Adam had three wives. The first was Lilith. She was a powerful woman, who would not be subservient to him, and as such, she was expelled from the Garden of Eden, and would not return. Some say, she mated with the angels and demons. The second wife had no name. She was made from nothing, before Adam's eyes. He watched as her bones formed, and then her organs, and then her muscles, bile and skin. Because he had seen what she was made from, Adam would not look at her. Some say she was destroyed by God, others say she was simply cast out of the Garden. At last, Eve was made from Adam's rib, and as is commonly known, she and Adam ate from the Tree of Knowledge, and were cast out of the Garden as well.

Next, Abel tells his story; a secret. He tells that long ago, before the known world was a speck in space, Death and Dream went walking. One day, they passed by two brothers who were fighting. The one brother had offered a sheep to the creator, and the other his crops of fruits and vegetables. The creator was more pleased by the sheep, and so the elder brother who had offered crops became angry, and killed the younger. Death came to him, planning to take him to a garden of her own. Dream, however offered the younger brother a place in his own garden, as a guardian of secrets. He was given his own house full of secrets to look after, but he soon grew lonely, so he visited Dream. Dream offered him a gift. When the younger brother returned to his home, he found another house full of mysteries next door to his own, and his elder brother was its custodian. Reuinited, the brothers lived side by side for eternity.

Matthew wonders if all of these stories are true, and Abel nearly gives away the secret of the parliament of rooks, but Cain prevents him, sending everyone home instead.

As Eve carries Daniel and Matthew from the house, Abel defies his brother, poking his head out the window, and revealing that it is not a parliament at all. The rook in the centre of the circle is a story teller, and the result is the other rooks' response to the story. Angrily, Cain kills his brother again, warning that mysteries are more exciting to the mind than the secrets behind them.

Lyta realizes that it's her son's dinner time, and goes to wake him. She picks him up in her arms, but she is confused to find a very dirty raven's feather with him. She thinks little of it, wondering about the mysteries that surround her son.