Peter Kay (2 July 1973-):
'My Dad used to say 'always fight fire with fire', which is probably why he got thrown out of the fire brigade.'

Billy Connolly (24 November 1942-):
'My definition of an intellectual is someone who can listen to the William Tell Overture without thinking of the Lone Ranger.'

Les Dawson (1931-1993):
'My wife sent her photograph to the Lonely Hearts Club. They sent it back saying they weren't that lonely.'

Spike Milligan (1918-2002):
'Chopsticks are one of the reasons the Chinese never invented custard.'

Oscar Wilde (1854-1900):
'The English country gentleman galloping after a fox is the unspeakable in full pursuit of the uneatable.'

Eric Morecambe (1926-1984):
'I think football would become an even better game if someone could invent a ball that kicks back.'

Bob Hope (1903-2003):
I remember my staff asking me when I was going to retire. I said when I could no longer hear the sound of laughter. He said: "That never stopped you before".

Jerry Seinfeld (April 29, 1954-):
'I wonder if illiterate people get the full effect of alphabet soup.'

“Drunk? I’m not drunk! You wouldn’t dare call me drunk if I was sober!”

"Dogs are not like cats, who amusingly tolerate humans only until someone comes up with a tin opener that can be operated with a paw."
(αυτό πήγαινε για το γατόνημα, αλλά το βάζω εδώ).

"Cold is God's way of telling us to burn more Catholics."

Άλλη ανεξάντλητη πηγή!
- The way I see it, these days there's a war on, right? And, ages ago, there wasn't a war on, right? So, there must have been a moment when there not being a war on went away, right? And there being a war on came along. So, what I want to know is: How did we get from the one case of affairs to the other case of affairs?
- Do you mean "How did the war start?"

sapere_aude said:
-- Baldrick, have you no idea what irony is?
-- Yeah, it's like goldy and bronzy, only it's made of iron.
Click to expand...

Dharvatis, we spring into action... and escape.

Ωραία ατάκα από τον Dan Aykroyd στο Sneakers:
We got bupkis! We turn ourselves in now, they'll give us twenty years in the electric chair!

"An oral contract isn't worth the paper it's written on."

"Gentlemen, include me out."

"They stayed away in droves."

“This is not a novel to be tossed aside lightly. It should be thrown with great force.”

“That woman speaks eighteen languages, and can't say 'No' in any of them.”

nickel said:
[...]
In belles lettres the witty literary slight has evolved into a genre because, as 20th-century trial lawyer Louis Nizer noted, “A graceful taunt is worth a thousand insults.” To wit, from high culture, Mark Twain: “I didn't attend the funeral, but I sent a nice letter saying I approved of it.” Winston Churchill: “He has all the virtues I dislike and none of the vices I admire.” And from pop culture, Groucho Marx: “I've had a perfectly wonderful evening. But this wasn't it.” Scientists are no slouches when it comes to pitching invectives at colleagues. Achieving almost canonical status as the ne plus ultra put-down is theoretical physicist Wolfgang Pauli's reported harsh critique of a paper: “This isn't right. It's not even wrong.” I call this Pauli's proverb.
[...]

daeman said:
When Insults Had Class

'He is not only dull himself; he is the cause of dullness in others.' -- Samuel Johnson

'Why do you sit there looking like an envelope without any address on it?' -- Mark Twain

'His mother should have thrown him away and kept the stork.' -- Mae West

'Some cause happiness wherever they go; others, whenever they go.' -- Oscar Wilde

Lady Astor once remarked to Winston Churchill at a dinner party, 'Winston, if you were my husband, I would poison your coffee!' Winston replied, 'Madam, if I were your husband, I would drink it!'

'I have never killed a man, but I have read many obituaries with great pleasure.' -- Clarence Darrow

'He has no enemies, but is intensely disliked by his friends.' -- Oscar Wilde

'I am enclosing two tickets to the first night of my new play; bring a friend... If you have one.' -- George Bernard Shaw to Winston Churchill. Churchill's response: 'Cannot possibly attend first night, will attend second, if there is one.'

'I feel so miserable without you; it's almost like having you here.' -- Stephen Bishop

'I've had a perfectly wonderful evening. But this wasn't it.' -- Groucho Marx

'I didn't attend the funeral, but I sent a nice letter saying I approved of it.' -- Mark Twain
Click to expand...

nickel said:
[...]
Αντιγράφω από τη Wikipedia:
[Bessie Braddock] is often erroneously credited with a celebrated exchange of insults with Winston Churchill, also ascribed to Nancy Astor:
Braddock: "Winston, you are drunk, and what's more you are disgustingly drunk."
Churchill: "Bessie, my dear, you are ugly, and what's more, you are disgustingly ugly.
But tomorrow I shall be sober and you will still be disgustingly ugly."​
​
[...]
Αξίζει να προστεθεί εδώ σύνδεσμος σε κείμενο του Simon Hoggart για διάφορους παρόμοιους πολιτικούς μύθους:
http://www.dailymail.co.uk/news/art...as-True-tales-just-great-political-myths.html

You could fill a book with what Winston Churchill didn't say. It would be almost as long as one made up of genuine quotes.
​
[...]
Click to expand...

Nobody follow us or I kill myself and then her.

Winston Churchill has been named king of the witty put-down.

The legendary Prime Minister topped a poll for the funniest insults doled out by musicians, actors, politicians and other public figures.

Churchill’s famous “I may be drunk, Miss, but in the morning I will be sober and you will still be ugly”, clinched top spot.

His retort of “Tell him I can only deal with one s**t at a time” on being disturbed in his toilet after a call from the Lord Privy Seal saw Churchill bag two entries in the top 10.

Also in was Barack Obama’s ‘You can put lipstick on a pig… it’s still a pig’ dig at Sarah Palin after she joked the only difference between a pitbull and a ‘soccer mom’ was lipstick.

And Groucho Marx’s scathing ‘She got her good looks from her father. He’s a plastic surgeon’, also scored highly.

Liam and Noel Gallagher’s back-biting saw them make it a family affair, with their recent feud making it on the list as well as bitchy comments about other celebs.

Noel proclaimed: “Liam only has two problems - everything he says and everything he does,” and previously took a pot-shot at Robbie Williams, labelling him “the fat dancer from Take That”.

Liam has previously sniped at Victoria Beckham’s plans to become an author, saying: “She can’t even chew gum and walk in a straight line, let alone write a book.”

The poll was carried out to mark today’s Blu-ray and DVD release of ‘Behind the Candelabra’, the life story of outrageous star Liberace.
Top 10

1. Winston Churchill to Lady Astor: “I may be drunk, Miss, but in the morning I will be sober and you will still be ugly.”

2. Barack Obama, in response to Sarah Palin’s joke that the only difference between a pitbull and a ‘soccer mom’ was lipstick: “You can put lipstick on a pig… it’s still a pig.”

3. Liberace to a critic: “Thank you for your very amusing review. After reading it I laughed all the way to the bank.”

4. Noel Gallagher on Robbie Williams: “You mean that fat dancer from Take That?”

5. Winston Churchill on the toilet during a call from the Lord Privy Seal: “Tell him I can only deal with one s**t at a time.”

6. Frank Sinatra on Robert Redford: “Well at least he has found his true love – what a pity he can’t marry himself.”

7. Elizabeth Taylor: “Some of my best leading men have been dogs and horses.”

8. Groucho Marx: “She got her good looks from her father. He’s a plastic surgeon.”

9. Bette Midler on Princess Anne: “She loves nature, in spite of what it did to her.”

10. Liam Gallagher on Victoria Beckham’s aspirations to become an author: “She can’t even chew gum and walk in a straight line, let alone write a book.”
http://www.mirror.co.uk/news/weird-news/sir-winston-churchill-wins-top-2368566​

Have a short holiday! (And a split of a second later) Did you enjoy it?


Nickel adds:
"As a special reward, Baldrick, take a short holiday. Did you enjoy it? Right."
http://www.thetop100.net/the-entertainment-zone/the-top-100-blackadder-quotes/list/z26l54.aspx

Work is like old age: the worst thing in the world, except for the alternative.

'Age is an issue of mind over matter. If you don't mind, it doesn't matter.'
Click to expand...

In our job, work is an issue of matter over mind; if it matters, you don't mind. 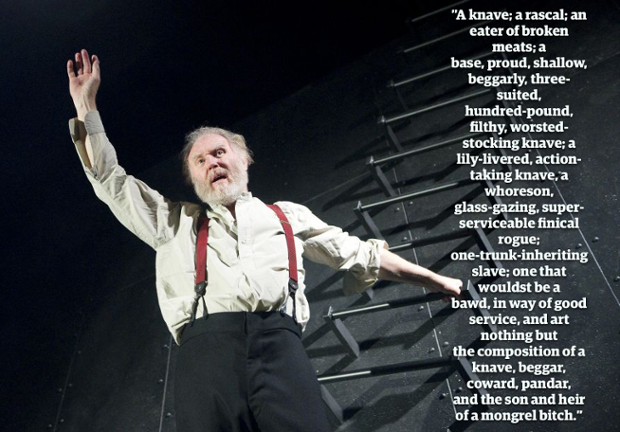 A knave, a rascal, an eater of broken meats; a base, proud, shallow, beggarly, three-suited, hundred-pound, filthy, worsted-stocking knave; a lily-livered, action-taking knave; a whoreson, glass-gazing, super-serviceable finical rogue; one-trunk-inheriting slave; one that wouldst be a bawd in way of good service; and art nothing but the composition of a knave, beggar, coward, pander, and the son and heir of a mongrel bitch; one whom I will beat into clamorous whining if thou deniest the least syllable of thy addition.

You’re a lowlife, a rascal who eats leftover scraps. You’re an ignoble, arrogant, shallow, vulgar, pretentious, conceited, filthy third-rate servant who thinks he’s something special. You’re a cowardly lawyer-loving bastard; a vain, brown-nosing, prissy scoundrel who’d pimp himself out to advance his career; a bag lady. You’re nothing but a lowlife, a beggar, a coward, and a pimp, the son and heir of a mutt bitch. I’ll beat you until you whine and cry if you deny the least bit of this.


A knave, |You’re a lowlife,
a rascal, |a rascal
an eater of broken meats; |who eats leftover scraps.
a base, |You’re an ignoble,
proud, |arrogant,
shallow, |shallow,
beggarly, |vulgar,
three-suited, |pretentious,
hundred-pound, |conceited,
filthy, |filthy
worsted-stocking knave; |third-rate servant who thinks he’s something special.
a lily-livered, |You’re a cowardly
action-taking knave; |lawyer-loving bastard;
a whoreson, glass-gazing, |a vain, brown-nosing,
super-serviceable finical rogue; |prissy scoundrel who’d pimp himself out to advance his career;
one-trunk-inheriting slave; one that wouldst be a bawd in way of good service;|a bag lady.
and art nothing but the composition of a knave, |You’re nothing but a lowlife,
beggar, |a beggar,
coward, |a coward,
pander, |and a pimp,
and the son and heir of a mongrel bitch; |the son and heir of a mutt bitch.
one whom I will beat into clamorous whining if thou deniest the least syllable of thy addition.|I’ll beat you until you whine and cry if you deny the least bit of this.
Καλημέρα!
You must log in or register to reply here.
Share:
Facebook Twitter Reddit Pinterest Tumblr WhatsApp Email Share Link
Top