Staff member
The decision by a Council in Devon to drop apostrophes from street names, “to avoid potential confusion”, has caused ridicule. Beck’s Square and Blundell’s Avenue in Tiverton risk becoming merely Becks and Blundells. More scorn greeted the news that Mid Devon had voted to abolish the little signifier after holding a “risk assessment”. The ruling has given rise to parodies on the lines of “Ive recently completed a risk assessment and its been decided not to use apostrophes on the grounds that theyre confusing”.

The best thing about stories of this kind is that they bring to attention the existence of bodies such as the Apostrophe Protection Society, based in Boston, Lincs, the sort of institution we think of as uniquely English. Meanwhile, we have some sympathy for the Mid Devon councilors. The TLS offices were until recently in Gray’s Inn Road. Or Grays Inn Road? One editor travels from Shepherd’s Bush -- or Shephers; another from Earls (Earl’s?) Court. Would anything be lost by doing away with these pesky apostrophes? On the other hand, we cannot forget the commuter on Piccadilly Line who was asked by a fellow passenger in a crowded carriage, “Is this Cockfosters?”. Eager to avoid confusion -- it certainly wasn’t his -- he disembarked.

Staff member
...
Εμ, όταν το είδα δεν το πόσταρα, και μετά το ξέχασα. Από τον Κουίνιον πριν δυο βδομάδες:
...
...
Outrage at local authority plans to abolish apostrophe
Mid Devon District Council's vote on whether to remove apostrophes from street signs 'to avoid confusion' is widely condemned
The sometimes vexing question of where and when to add an apostrophe appears to have been solved in one corner of Devon: the local authority is planning to do away with them altogether.
Later this month members of Mid Devon district council's cabinet will discuss formally banning the pesky little punctuation marks from its (no apostrophe needed) street signs, apparently to avoid "confusion".

The news of the Tory-controlled council's (apostrophe required) decision provoked howls of condemnation on Friday from champions of plain English, fans of grammar, and politicians. Even the government felt the need to join the campaign to save the apostrophe.

The Plain English Campaign led the criticism. "It's nonsense," said Steve Jenner, spokesperson and radio presenter. "Where's it going to stop. Are we going to declare war on commas, outlaw full stops?"
Jenner was puzzled over why the council appeared to think it a good idea not to have punctuation on signs. "If it's to try to make things clearer, it's not going to work. The whole purpose of punctuation is to make language easier to understand. Is it because someone at the council doesn't understand how it works?"
...
Sian Harris, lecturer in English literature at Exeter University, said the proposals were likely to lead to greater confusion. She said: "Usually the best way to teach about punctuation is to show practical examples of it – removing [apostrophes] from everyday life would be a terrible shame and make that understanding increasingly difficult. English is a complicated language as it is — removing apostrophes is not going to help with that at all."
...
To be fair to modest Mid Devon, it is not the only authority to pick on the apostrophe. Birmingham did the same three years ago (the Mail went with the headline The city where apostrophes arent welcome).
The book retailer Waterstones caused a bit of a stir last year when it ditched the mark.

The council's communications manager, Andrew Lacey, attempted to dampen down the controversy. Lacey said: "Our proposed policy on street naming and numbering covers a whole host of practical issues, many of which are aimed at reducing potential confusion over street names.
"No final decision has yet been made and the proposed policy will be discussed at cabinet," he said.
Council leader Peter Hare-Scott (with a hyphen), was not amused by the attention his authority was receiving.
... 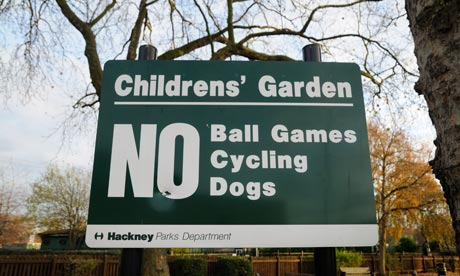 - Whats so confusing?
- Exactly. What sort of idiot cant use apostrophe's properly?
- Its all maddnes's!
- Ask your sisters sons teachers.
- "For God's sake?" I see you're monotheist!
- Eat's Shoot's and Leave's.
- It is after all, just one drop of paint. There is tremendous scope here for affected locals to engage in a little guerilla painting. Not that I'd ever encourage anyone to vandalise street signs, you understand.
- Can they read in Mid Devon?
- Is Mid in Devon?
- First they came for the apostrophe...
- Αs David Marsh pointed out on another website:

daeman said:
- First they came for the apostrophe...
Click to expand...

First they came for the hyphen,
and he didn't speak out because he didn't use hyphens.

I sympathize with the apostrophe question described by J.C. (TLS March 22). I was happy for many years with the English-language version of my surname, but in recent times I have struggled maddeningly with websites which reject it as illegitimate because of its apostrophe (some of these were even Irish government websites, which ought to have known better). Strangely, though, I find that, now I have reverted to the Irish-language version, life is little easier.

The Guardian said:
Reports of councils culling punctuation from street signs has prompted a grammar expert to warn that "if they take our apostrophes, commas will be next".
​Grammar campaigners have used marker pens to fill in missing apostrophes in Cambridge after the city council ruled they should be removed to avoid confusing emergency services.
Click to expand...

daeman said:
...
- It is after all, just one drop of paint. There is tremendous scope here for affected locals to engage in a little guerilla painting. Not that I'd ever encourage anyone to vandalise street signs, you understand.

- First they came for the apostrophe...

First they came for the hyphen,
and he didn't speak out because he didn't use hyphens.

Then they came for the apostrophes,
and he didn't speak out because he didn't have much use for apostrophes.
Click to expand...

Then they came for the commas,
and there was no one left to speak for them, except Nickel.

Staff member
...
A society dedicated to preserving the correct use of the apostrophe has shut down because "ignorance has won".

Retired journalist John Richards, 96, started the Apostrophe Protection Society in 2001 to make sure the “much-abused” punctuation mark was being used correctly.

But Mr Richards has now announced: “With regret I have to announce that, after some 18 years, I have decided to close the Apostrophe Protection Society.

“There are two reasons for this. One is that at 96 I am cutting back on my commitments and the second is that fewer organisations and individuals are now caring about the correct use of the apostrophe in the English Language."
...

Anthony Zadravic posted that another real estate agent was “selling multi million $ (sic) homes in Pearl Beach but can’t pay his employees superannuation”. [...] There is a suggestion the NSW Central Coast realtor meant to have an apostrophe after the word employee and was only referring to his experience.
You must log in or register to reply here.
Share:
Facebook Twitter Reddit Pinterest Tumblr WhatsApp Email Share Link
Top