By chance I came upon this unbelievably beautiful song. I have just two queries: why is April called ξανθός (blonde) & is there a single word to translate γαϊτανόφρυδο into English? 'Cordon-shaped eyebrow' is ugly, while 'thin & finely designed' is clumsy?

Staff member
...
Picture these eyebrows, Theseus, in a ray of moonlight: 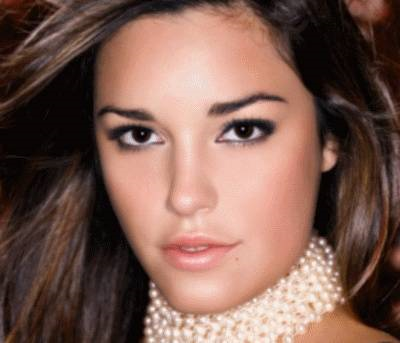 but -allegedly- blonde. A sight for sore eyes.

In response to why April is describes a blond, Theseus, see the following verses by Solomos. I have also highlighted the verses that you are most likely to come across in other text and included a clip from Eternity and a Day (note 3:15).

I won't have any time tonight to answer these questions. Suffice it to say, I will have a go at the Solomos passage and the Sarantaris. The question arises I have to translate the passages before I can understand ξανθός. Νήπιος seems to be used only in Classical and Koine Greek: I was almost tempted to write 'fair and foolish' for the first line of Earion's little poem but that is probably wholly wrong. I'll give both poems my best tomorrow. Thanks for all the help and interest. :)

Also, I am not sure why you are having a hard time understanding why April is described as ξανθός. April is the month of spring, where everything is fresh and new and bright and the sun shines and gives everything a pale yellow hew. Also, babies and young children are blond, and April is a young month.

Υou may be right about fair and foolish.

Thanks, SBE. I imagined that brunette was more the colour of the hair of Greek children. Not a prejudice: more a mistake. But as for my own children one was born with very blond hair; the other two blondish to brown hair. I should have known.:)
I'll try to get the translation of Solomos but it is a good exercise for me to try and translate it myself. I am a glutton for punishment.

Staff member
There may be more connotations in νήπιος, apart from foolish. I woud suggest also “young, inexprerienced and innocent”.

Theseus said:
Thanks, SBE. I imagined that brunette was more the colour of the hair of Greek children. Not a prejudice: more a mistake.
Click to expand...

This reminds me of an interview of the mother of a British infant that disappeared in Greece nearly 30 years ago. She said that they thought at first that it would be easy to find him because he would stand out. And soon realised that they were wrong and that there are a lot of fair-haired children in Greece and they could not assume that every family was suspect. Case in point, my godson who was blond and blue eyed until about age two and now has brown hair and eyes. And every other child I know.

Staff member
We put a heavy homework on Theseus, SBE. But since he touched on Theodorakis, I think it’s high time for Chatzidakis also.

And for that matter why not for Tsaroukhis as well. 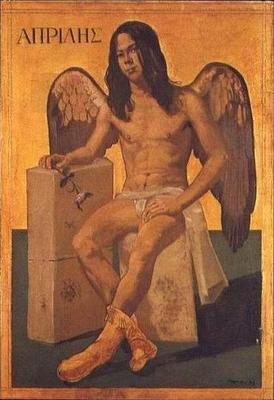 One thing now at a time. (Thanks, SBE, for your setting me right on the matter of Greek youngsters!:).
First, the short poem of Sarantaris:

I find this poem very difficult. I don't make real sense of it

Thanks for all this help, SBE. As I thought I made rather a pig’s ear of the translation! Περιβόητος seems to carry the negative meaning of notorious in many dictionaries. Does it mean here 'much-vaunted'?

I have done most of my homework, including Earion’s suggestions.
This is Απαγωγή:

To complete my homework, except for the Solomos Temptation passage, here is:-

It was very worthwhile homework! Thank you, SBE & Earion.
I was moved to see the expression on the face of Mikis Theadorakis himself. :)

Yes, but the last two of these Theseus these are second-rate executions (sic) of the songs by second-rate artists, who are however popular for other reasons.
The third one in particular (μέσα στα μάυρα σου μαλλιά) is out of tune and in places sounds like a σκυλάδικο. And the second one is λαικο-ποπ (and I personally find the singer unbearable, but she went through a period where she was on the radio and TV all the time).

You should aim for the earliest recordings from the 1960s, which in my opinion are better and closer to the spirit of the music and the singers were seriously talented artists.

and here is another version of the same, from the same era but in a completely different style (this particular song was covered by almost everyone who was someone in Greek music in the early 60s).

Theodorakis, unlike other composers, never hid the fact that he's in it for the money, so he permits anyone to perform his music, quite often without any quality checks. Hadjidakis on the other hand was the very opposite and made sure that even after his death his legacy would be safeguarded in an elitist way, with the result of course that today, twenty years after his death, most young people know only a small part of it. But that's OK, for me it was love at first hearing at age 18 and I like it that way. What Earion suggested was an excellent bridge, Ο Σκληρός Απρίλης is Hadjidakis' orchestrations of rembetico, which at the time it came out, was not the sort of music people listened to. So in that sense, he did bring rembetico to the masses.
As for περιβόητος, yes, it means notorious, and this is why I said that April is not αβρός. The use of this word implies that he is not all the positive things the poet says about him. Wow! You know, I had a very low mark in mod.greek.lit at school, because I was really bad at analysing poems. I think my teachers would be fine with my analysis here.

By the way, as a child there were two songs I adored, no idea why because they are sad, but because they were not on the radio much, at some point when I was in my teens I thought I had made them up and that they were probably a mix of several other things I had heard. This one by Theodorakis

and this one by Hadjidakis

PS as you can see, there is more input from Lexi readers with this kind of music, because we are familiar with it and we grew up with it. Rembetico, with the exception of some of it which remains popular, is too much of a certain place and time, and the vocabulary too obscure for modern listeners.
Last edited by a moderator: Apr 3, 2018

SBE said:
Theodorakis, unlike other composers, never hid the fact that he's in it for the money, so he permits anyone to perform his music, quite often without any quality checks.
Click to expand...

I cannot possibly agree with this assertion, and I don't think Theodorakis himself "never hid this fact". Both composers (Th. and Chatzidakis) had an immense ego, one expressing it in a highly elitistic way, another in a populist one, so to speak. Theodorakis wanted and wants to be heard and praised by crowds, that's why (I believe) he never declined any proposition by popular singers. As another great composer or rather song-maker (with a similar ego), Savvopoulos, had said, Theodorakis wants a huge stadium filled with a crowd that sings, in one voice, και θα 'μαι πάντα μόνος :)
Needless to say, all three are perfectly justified to claim their fame, no matter how immense their egos are!
You must log in or register to reply here.
Share:
Facebook Twitter Reddit Pinterest Tumblr WhatsApp Email Share Link
Top