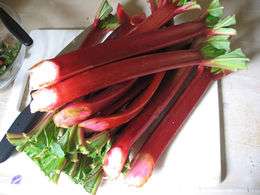 Ryan Kelley commented, “Your discussion of rube to mean a fight led me to the term rhubarb, a somewhat antiquated Americanism related to a fight during a baseball game.” This seems to have begun in New York in the early 1940s, originally as an loud argument, or what Baseball Magazine in 1943 called “Brooklynese for a heated verbal run-in, especially between players and umpires”. I suspect that it comes from the same source as the older muttering of the word by extras or supporting actors to simulate the sound of a mob. Paul Dickson also cites this origin in his baseball dictionary.


Online Etymology Dictionary:
rhubarb[SUP]2[/SUP]:
Baseball slang meaning "loud squabble on the field" is from 1938, of unknown origin, said to have been first used by broadcaster Garry Schumacher. Perhaps connected with use of rhubarb as a word repeated by stage actors to give the impression of hubbub or conversation (attested from 1934).

4. An excited, angry exchange of words, especially at a sporting event.

The principles of modern philosophy
Were postulated by Descartes.
Discarding everything he was uncertain of
He said 'I think therefore I am a rhubarb tart.'
A rhubarb what? A rhubarb tart!
Rene who? Rene Descartes!
Poor Marx he thought he was a rhubarb tart!

A rhubarb tart has fascinated all the poets.
Especially the immortal bard.
He made Richard the Third call out at Bosworth Field:
'My kingdom for a slice of rhubarb tart!'
Immortal what? Immortal tart!
A rhubarb what? A rhubarb bard!
As rhymes go that is really pretty bard!

Since Wassily Kandinski and Paul Klee
Laid down the axioms of abstract art
Even Jackson Pollock and Piet Mondrian
Preferred to paint a slice of Rhubarb tart
A Wasi- who? A Wassily!
A Candin- who? a Candinty
And how did he get in here for a start?

If however you're a beekeeper, accountancy,
Sir, General-in-Command,
Our advice to you is always go to work
On a slice of Rhubarb Tart!!!
Last edited by a moderator: Jun 3, 2015
N