—Albatross! Bloody albatross flavour!
—Stop that, stop that. It's filthy.
No one enjoys a good laugh more than I do, except perhaps for my wife and some of her friends. Oh, yes, and Captain Johnson. Come to think of it, most people enjoy a good laugh more than I do but that's beside the point. Right, let's get on with this skit. Where's the other person for this skit?

Oh, he's gone where? On holiday?

Cheap and nasty, but cheerful:


Graham Chapman: (Ready to start the next sketch) As early as the late 14th century, or indeed as late as the early 14th century, the earliest forms of japes were divisible in...
Mr. Smoketoomuch: Meanwhile, the bloody guardia are arresting 16-year olds for kissing in the streets -(something I can't make out) - everybody's buying little awful horrid donkeys with their names on, I can't tell you the -(something else I can't make out)- and when you finally get to Manchester, there's only another bloody bus to carry you another 60 miles...

Meanwhile, the bloody guardia are busy arresting 16-year olds for kissing in the streets. And on the last day at the airport lounge everybody's buying little awful horrid donkeys with their names on, and bullfight posters with their own names on, like Antonio and Mr Τάδε of Τάδε and when you finally get to Manchester

Monty Python's dead parrot has made a new appearance in London - as a giant fibreglass model.

The bird at the centre of the famous Monty Python 'Dead Parrot' sketch has been carefully recreated, as a celebration of the screening of the final Monty Python live show on comedy channel Gold. 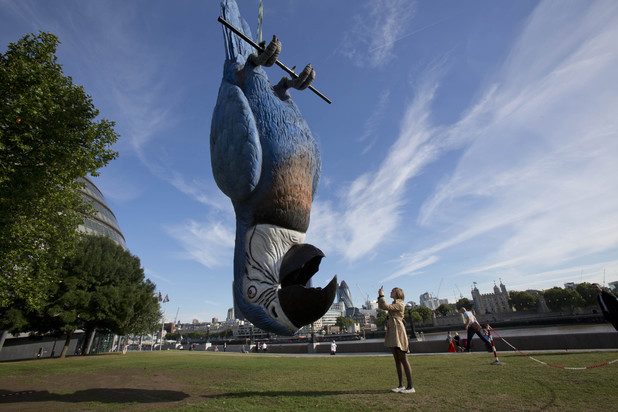 The sketch, originally performed by John Cleese and Michael Palin in 1969, was recently voted Britain's favourite Monty Python sketch of all time.

The huge sculpture of the 'Norwegian Blue' was hung upside down from a crane in London, before being laid to rest at Potters Fields on the South Bank, near Tower Bridge.

The parrot measures almost 50 feet in length, the equivalent to the height of five elephants standing on top of one another. It took a team of three sculptors over two months to design, construct and paint the model.

Lead sculptor Iain Prendergast said: "We are all Monty Python fans, so we were delighted to receive the brief from Gold to recreate the mythical 'Norwegian Blue' on a giant scale. We watched both live and televised versions of the sketch and found that there have been a number of different incarnations of the parrot with a variety of different plumages.

"Our sculpture provides a colourful hybrid of the dead parrots which have featured in the celebrated sketch. The key challenge for us was capturing the comedy value of the dead parrot, keeping the realism of the bird whilst also adding touches like the bloodshot, 'stunned' eyes."
... Can you see the color on my face? It's called envy green.

The Galaxy DNA Song in Lexi:

Our Earth which at its birth almost five billion years ago
from out of a collapsing cloud of gas
drew life, which is quite new
and eventually led to you
in only 3.5 billion years or less

We're 98.9 percent the same as chimpanzees
whose trees we left three million years ago
to wander swapping genes
out of Africa, which means
we're related to everyone we know

you've a tiny little blink of life to try and understand
what on earth is really going on
in biology and chemistry
which made you you
and made me me
but don't ask me, I only wrote the song
Click to expand...

But don't ask me, I only transcribed those lyrics 9 months ago. :s

Bernie, I feel for you, it's not easy being green.

Staff member
...
A teaser from a geezer that couldn't make the pleaser:

lookshurry (noun): Who would have thought forty years ago, we'd all be sitting here doing Monty Python, eh?


A teaser for a geezer that alas was not *pleasered.